How Willie Nelson Forever Changed The Music Scene in Austin

or Why Willie Nelson Should Never Have to Buy a Drink Anywhere in Austin, Texas. 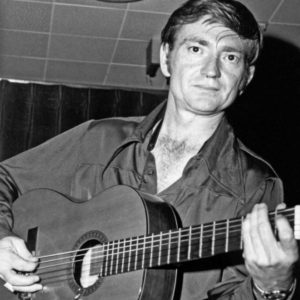 During the summer of 1970, a few years after the summer of love, a few hippies from Austin revamped the National Guard armory on South 1st and made it into a concert hall and beer garden and christened it The Armadillo World Headquarters. And during the first few years The Armadillo brought in a lot of talent that are now legendary names in music, including Ry Cooder, Taj Mahal, Dr. John, Frank Zappa and The Flying Burrito Brothers to name a few. But on August 12, 1972, Willie Nelson took the stage and many consider that to be the night that Austin, as a music town, changed forever.

That does not mean that things on the music front were not already happening. It’s just that on that night in ‘72, Willie launched what would become the modern music scene. What is most important about what happened that night is the singer-songwriter became more up front than ever before. People like Townes Van Zandt and Jerry Jeff Walker as well as Guy Clark became more well known and it wasn’t necessary anymore to go to Nashville to make a name writing great songs.

On the East Side of Austin, a handful of white kids were listening to local bluesmen like Blues Boy Hubbard, T.D. Bell and Hosea Hargrove at places like Ernie’s Chicken Shack, Marie’s Tea Room and Charlie’s Playhouse. These young guys were hard core blues lovers and they played in bands like The Storm and The Nightcrawlers. Two brothers played in those bands who were pretty good guitar players. One may just have been the best rhythm guitarist in the world and the other became who many consider the greatest guitar player of all time. Their names were Jimmie and Stevie Ray Vaughn. 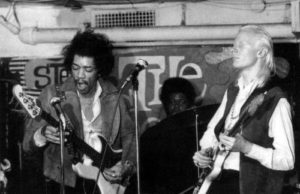 Jimi Hendrix and Johnny Winter at The Vulcan Gas Company

There were rock players, too. They played at the old Vulcan gas Company which was inspired by the music scene in San Francisco. The Vulcan was the forerunner to The Armadillo and it featured rock, folk and blues players. Muddy Waters played there and a kid from Beaumont opened for him who could really play. And he is also considered by many to be the greatest guitar player of all time. His name was Johnny Winter.

But it all changed when Willie took that stage that night in “72.

He was older than the people who were at the center of Austin music scene at that time. He had turned 39 that year and he looked totally different than to what we are now accustomed. Short hair and clean shaven at the time, but he would change his look quickly and adopted his trademark bandanna and beard, along with jeans, t-shirts and tennis shoes in short order. That night he played songs he had written that other people made famous including “Crazy”, “Nightlife” and “Funny How Time Slips Away”. He also demonstrated to many what was not well known at the time – an incredible ability to play guitar that would later be showcased on the Bugs Henderson Album “Daredevils of The Red Guitar”.

A couple of years later, Willie agreed to play live on television for what is now KRLU. Bill Arhos, the program director loved it and got some grant money to shoot a television series featuring Texas music. That pilot Willie shot that night became the longest running music show in American television – Austin City Limits. Afterward, Willie bought the old Terrace Motor Inn, which was right off South Congress and turned it into a recording studio and then moved that studio to Spicewood near Lake Travis. His ranch was sprawling and included an old west town (later used for part of the filming for Lonesome Dove), a nine hole pitch and putt which is now the Briarcliff Golf Course and of course a recording studio, at that time considered to be the most modern facility in Texas.

And yeah, that’s why Willie should never reach in his pocket to buy a drink, or for that matter a “doobie”, “nuggie” or a “lid” – EVER!

The Emerald – A Great Alternative to Green Beer