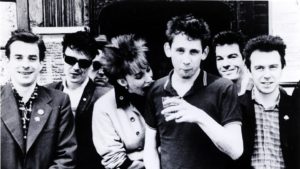 The Pogues were founded in 1982 and are another band formed from the remnants of the late 70’s punk movement, although in all honesty they are arguably the most original of all the punk leftovers. They were originally fronted by Shane MacGowen until 1991 and then Spider Stacy until their initial disbandment in 1996 (with a short stint by Joe Strummer of The Clash in between). That’s not a bad run when you consider the average shelf life of any band is about three years.

During their respective runs as front man for the pogues, both MacGowen and Stacy were primary songwriters and their lyrics are laced with political themes which were ingrained in their punk years.

What set the band apart from other bands at that time was their punk lyrics and music arranged using traitional Irish instruments like the tin whistle, banjo, accordian, cittern and mandolin. They grew to be quite popular in Europe and the U.S. and inspired many imitators. They also heavily influenced bands like Flogging Molly and Dropkick Murphy’s.

The Pogues got back together in 2001 and were well received by many fans across Europe and along the East Coast of the U.S. until they broke up again in 2014. Unfortunately, the group did not record any new material during this period.

In a 2015 interview MacGowen stated The Pogues are no longer active.

“I went back with them and it was great for a bit, but we grew to hate each other all over again. We’re still friends. We were friends before the Pogues for years and we’re friends as long as we’re not touring together. I’ve done a lot of touring over the years. I’ve had enough of it.”

Here is a great video of The Pogues at the height of their power. You can just hear the spirit of the music soar. Hope you enjoy it as much as we do.

The Legend of Brian Boru
Scroll to top