recipes for drinks and food from Ireland 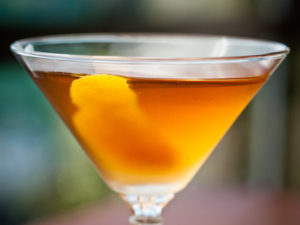 St. Patrick’s Day is a day that is definitely associated with tipsiness. And much of that is brought about through green beer and less than palatable swill. Sure, you have Guiness (my personal poison) and you do have Red Breast, my fave whiskey. But there isn’t much else. There just aren’t that many decent cocktails because most bar tenders aren’t particularly creative and Irish Whiskey doesn’t really mix well with other…er…mixes, ya know?

So here at LT Corner Pub, we present you something quite delicious – The Emerald!

No, not that Emerald. Or any other Emerald. It’s easy to be confused because there have been a lot of drinks named The Emerald over the years. But this one is really good and you’ll find yourself coming back to it on days that don’t end in a 7. It’s basically a Manhattan made with Irish Whiskey and orange bitters substituted for Angostura. It’s shamrock worthy to be sure and it gets that honor without a single drop of green dye! 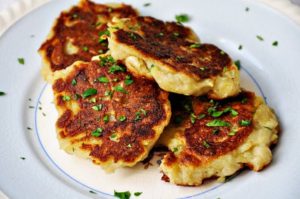 Cakes of Potato, known as boxty to the Irish, are said to have originated in the north midlands of Ireland in Connacht and Ulster. Those hailing from Sligo, Donegal, Longford, Mayo, Cavan and Leitrim are huge lovers of this simple, delicious dish.

Boxty is believed to have originated in the days of the Great Famine of 1847 through 1849 as a means of extending the food supply. There are a few recipes, but they all have use raw potatoes, that are grated finely and then served fried.

Boxty recipes have many twists including boiling the potato patty, baking it and even serving it like a dumpling. Today, many people spice up the original recipe adding vegetables and even meat to the dish. But no matter how you cut the mustard, the original style of serving them hot off of a griddle is still as tasty as ever.

Boxty has become increasingly popular in the last few years as Irishmen have become more interested in the original dishes of the Green Isle. In fact, you’ll find boxty on many a menu in Ireland today when only a few years ago it never would have been considered. But it is still a huge part of home cooking for the Sons and Daughters of Erin.

Over the last couple of years, as the Irish have become more interested in their own cuisine, the popularity of boxty has risen. It’s now quite normal to see boxty on a menu in a restaurant in Ireland, whereas a decade ago it would have still been considered a ‘peasant dish.’ However, boxty has always been popular as part of Irish home cooking.

As one traditional (if woefully out-dated) rhyme explains:

Boxty on the griddle,
Boxty in the pan,
If you can’t make boxty,
You’ll never get your man.