The Sound Of An Angel With A Broken Heart 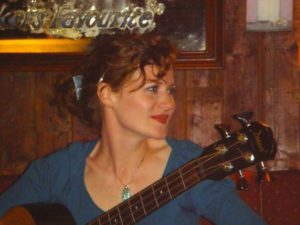 Sara Cullen playing out in her native Ireland.

The word integrity gets thrown around a good bit as a positive trait in business. It could be used in music as well, but a better word to describe a musician or a singer is the word authentic. Eric Clapton says that he can hear it in one note and I remember reading about how he literally had to pull over to the side of the road and immediately call his agent to find out who was playing guitar on Bowie’s landmark 1984 album “Let’s Dance” (The guitarist happened to be Stevie Ray Vaughan).

When you play music, it does not matter where you are from, what style or genre you are playing, or even in what language you sing. Because if you are authentic, your soul will be exposed. I believe it is the very the very thing that makes a singer unique – even if they are covering another performer’s songs. Singers like James Brown had it. So did Patsy Cline (in spades). Bob Dylan had it, too; although nobody would ever accuse ol’ Bob of having a great voice or being a great singer. John Lennon was one, too and it was intimacy with Lennon that hooked you. George Martin got it the first time he heard him sing.

Sara Cullen has it.

I listened to one musical measure of her voice and knew she did. There is no other word to describe it other than haunting, although not darkly so. No, hers is what I can only imagine to be the sound of a heartbroken angel.

Cullen is a very talented musician and singer / songwriter from Carrigart Ireland in the County of Donegal. Her family was very musical and she began performing live at a very young age. She is a multi-instrumentalist who plays guitar, violin, piano, double bass. But her greatest instrument is that beautiful, supernal voice.

She is confusing in a grand way as she blurs the lines of musical styles between Country, Jazz, Blues and of course, Traditional Irish Music or “Trad”. The blurring is in her delivery and phrasing and I do not know if it is actually cultivated or it is a natural extension of deep rooted influences that allows her to deliver her phrasing quite the way she does. But it’s done perfectly. And it is utterly unique and authentic.

I have no doubt that Clapton would stop his car if he ever heard her.

Sara will be playing live at LT Corner Pub in Lakeway, Texas as a favor to the owners of the pub. She is coming all the way from Ireland along with another excellent musician and Irish reconteur, Eunan Gallagher. They will be playing on March 17th and 18th at 8PM to 11PM.